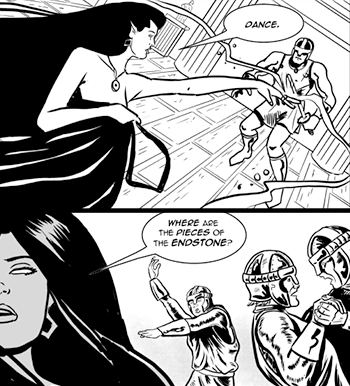 "...and twirl; now fosse, fosse, fosse aaand jazz hands!"
Fuyutsuki, who had this glazed over look in his eyes, nodded and replied like he had been for awhile as he stepped out of the car.
"What did you do to him?" Hikari wondered, watching the man walk to the other side of the car.
Asuka's grin widened. "Why, I took a hypnotic class in college? Who would think the Sub-commander was easy to put under."
Her door opened, thanks to her new servant, and she stepped out with the pride of a queen.
— "NonNeglecting Week"

Some characters have the ability to read, manipulate, or even control the minds/thoughts of other characters. Most often associated with Psychic Powers, these abilities run the gamut from mundane charisma/authority, to Magic and Powers, and to the paranormal. Extreme forms of mental manipulation even allow you direct access to the victim's body, turning them into a literal puppet to their will.