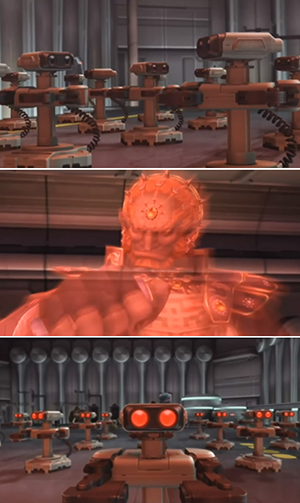 Look at me. I'm the captain now.
"I am assuming direct control."
— Harbinger

It's the next-to-final battle, and the heroes are moving in on the fortress. The Big Bad dispatches his Quirky Miniboss Squad and The Dragon, but while they pose a challenge for a while, they too fall. He is obviously miffed, but it's not like he can go out there himself...

The next thing that the fallen minions see is their boss' face looming above them. He informs them that they have failed, and they panic and retreat — and suddenly stand up with Mind-Control Eyes. Healed to full and twice as strong, they rush at the heroes again, but something's wrong. The villain is possessing them to finish the job.

A favored trick of The Man Behind the Man, to show that he really is the biggest threat despite hiding in the back. Also used in case of Non-Action Big Bad, when the villain is established as lacking the ability to be a legitimate Final Boss by the virtue of being unable to fight the heroes on an equal footing. This may result from him being too weak, too powerful, or an incorporeal force that never truly dies, and has to resort to trickery instead.

A form of Sequential Boss. Contrast "I Know You Are in There Somewhere" Fight, Heroic Willpower, and Brainwashed and Crazy, which use heroes as the controlled. If the miniboss(es) survive, expect a quick Mook–Face Turn, or that they were Good All Along.

Compare Berserk Button and Brainwashed. This is basically Mass Hypnosis or Face–Monster Turn done to one's allies instead of the enemy.