You may be looking for the Inheritance Trilogy, by N. K. Jemisin. 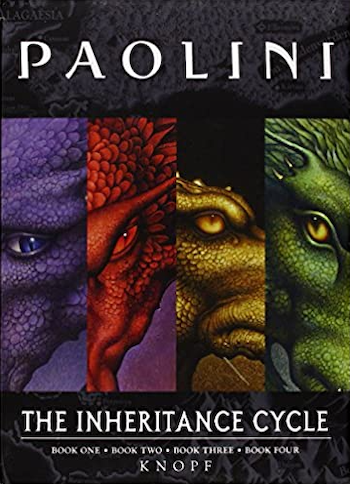 The Inheritance Cycle, formerly known as the Inheritance Trilogy, is a series of High Fantasy novels written by Christopher Paolini. The first book was originally self-published by Paolini and his parents, but has since migrated to Alfred A Knopf on the recommendation of Carl Hiaasen. It contains the following books:
Advertisement:

The novels tell the tale of Eragon, a farmboy who discovers a dragon egg in the mountains and is amazed when it hatches for him. He raises the dragon, Saphira, and becomes bonded with her as a Dragon Rider. Unfortunately, the evil Galbatorix, the ruler of The Empire who betrayed and destroyed the Dragon Riders long ago, finds out, and sends his impenetrably cowled Ra'zac servants to capture Eragon and Saphira.

They escape, but the Ra'zac burn down Eragon's home and kill his uncle. Our heroes set out for revenge, joined by the village's old storyteller, Brom, who, as it turns out, is a former Dragon Rider himself. On their quest, Eragon and Saphira meet up with a badass Anti-Hero with a Mysterious Past, rescue an elf princess, join the Varden, learn the truth about Eragon's past and his missing father, and face down foes far more powerful than themselves—eventually culminating in a final battle against Galbatorix himself.

The first book was adapted into a film in 2006, but after the film got extremely negative critical reception and relatively underperformed at the box office, there are currently no plans for any movie sequels. However, there have been petitions to reboot the series that (however unsuccessful) did gain sizable support, and Paolini has spoken about the movie after the fact, saying that it told its own story in the same vein that the books told their own story, and left it to the fans of the series to determine which story they like better.

The final title in the series, Inheritance, answered a number of key mysteries regarding the series, such as what was contained in the Vault of Souls and the fates of major characters like Galbatorix and Eragon, but left open certain nagging mysteries such as the source of the witch Angela's powers. Following its publication, author Christopher Paolini floated a number of possibilities regarding what he might work on in the future, including a hypothetical fifth title, spin-off titles focusing on characters other than Eragon, or separate works in other genres.

However, there was an approximately seven year gap in the series prior to the announcement of the publication of the short story collection The Fork, the Witch, and the Worm, which was stated to feature three original stories set within Alagaesia, interspersed with an unfolding adventure featuring Eragon set a year following the ending of Inheritance. The title includes a tale written by Christopher Paolini's sister, Angela, featuring the Angela the herbalist character she serves as the namesake for. It was published in December 2018.

All titles in the series have been published in multiple languages, including German, Spanish and Swedish.

This series of books provides examples of: