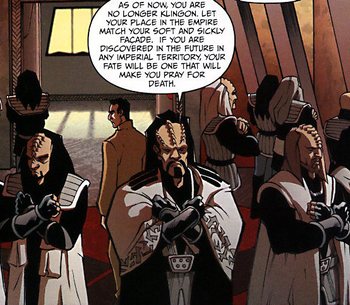 Many cultures and organizations have formalized and/or ritualized ways of casting someone out of their group, usually as a punishment for gross misconduct. These usually involve some form of action that symbolizes the rejection of the person being cast out, as well as a formalized speech or statement. The person being cast out may also have to do something to reflect their status.
Advertisement:

The Exile results directly from this; a Persona Non Grata can also receive this treatment. When this is done in the military or on a job, it's an Insignia Rip-Off Ritual.