Voted Off the Island 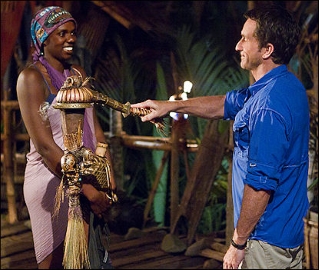 "It's time for you to go."
"The tribe has spoken."
— Jeff Probst, Survivor
Advertisement:

The most common structure for Reality TV, it involves voting off one member of a group of people in each episode. They may be voted off by judges (perhaps including The Mean Brit), their fellow contestants or by the viewing audience via the Internet or some other form of communication (yes, they do exist). Some shows use a method that combines two or more forms. Immunity may be offered as a prize in some manner; having it means that the player cannot be voted off. An Elimination Statement will probably follow. Needless to say, the last person left at the end wins.

Eliminated from the Race is an alternative structure. Compare There Can Be Only One. Tall Poppy Syndrome often emerges when the voting power is in the hands of the other contestants.