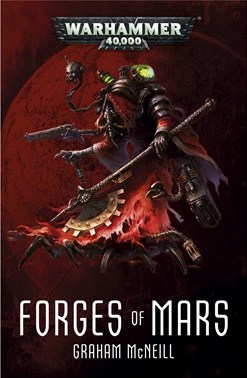 You are Ark Mechanicus. You are Speranza. You are the bringer of hope in this hopeless age.
Advertisement:

Forges of Mars is the 2017 omnibus collection of a trilogy of Warhammer 40,000 novels written by Graham McNeill featuring Archmagos Lexell Kotov's explorator fleet and its voyage across the wild astronomic sector known as the Halo Scar. The novels are notable for describing how the Adeptus Mechanicus explorator fleets work as well as insight into the Mechanicus itself, presenting us a whole array of characters from the different elements of the fleet, from the command staff to the menial workers. They also feature, in good 40K tradition, epic battles both on the ground and in space. The first book, Priests of Mars, was released in 2012, Lords of Mars was released in 2013 and Gods of Mars was released in 2014. Forges of Mars also includes a related side story.