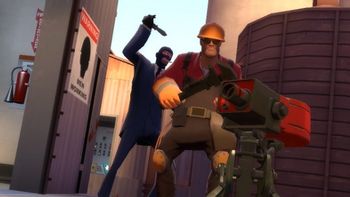 Found usually in RPGs and Stealth Based Games. A type of attack that gives you a chance to use stealth and surprise your victim, dealing massive, often lethal damage with a single hit.

Usually a Back Stab requires the player character to be right behind the target. Often this is the only way to dispatch an enemy undetected. This attack is a staple of assassins, spies and other similar characters or character classes.

As with One-Hit Kill, some enemies can be immune to this (typically those lacking the biology that make any one particular spot on its body more vulnerable than another, such as slimes or golems). The opposite of this is typically the Finishing Move.

Tabletop and video game-specific subtrope of In the Back. This is for a gameplay mechanic. If the non-game example does not explicitly refer to one (e.g., rules, damage bonuses etc.), please move to In the Back. Not to be confused with Chronic Backstabbing Disorder, though the two may overlap.