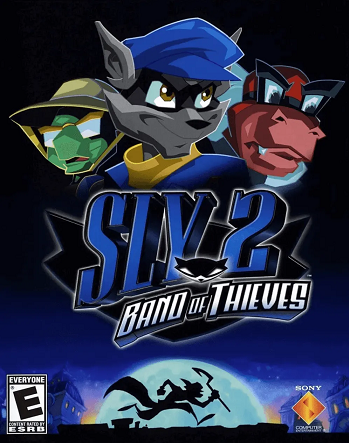 The Cooper Gang has a job to do... are ya in, pal?
"Boy, when we try to tick someone off, we really do the job."
— Sly Cooper
Advertisement:

Sly 2: Band of Thieves is the second game in the Sly Cooper series, developed by Sucker Punch and published by Sony. It released on the PlayStation 2 in 2004.

Two years after Sly Cooper and the Thievius Raccoonus, Sly and the gang find out that a series of mechanical parts of the shattered Clockwerk have been stolen by the Klaww Gang. While each individual piece is already potentially dangerous, together, they could be used to revive the defeated Clockwerk. While Sly and his gang follow these leads, they are pursued by Carmelita and her new partner, Constable Neyla, who are after both the Cooper Gang and the Klaww Gang.

Sly 2 plays much like its predecessor, with a large focus on stealth and Sly's acrobatic prowess. However, the game has shifted from a corridor platformer to a semi-open world style with mission-based gameplay and a bigger emphasis on combat. This change in focus has also led to the inclusion of a health meter instead of Sly and friends dying in one hit while also removing the lives system. Additionally, Sly's friends and fellow gang members Bentley and Murray have upgraded to full field status instead of helping from the sidelines. Bentley is unable to put up a good direct fight due to his fragility, but has access to a variety of powerful gadgets (such as sleep darts) and explosives to disable foes. Murray, meanwhile, can easily wade into hordes of enemies with his brawn but lacks any finesse to actually be stealthy.

The game was eventually re-released in HD on the PlayStation 3 and PlayStation Vita in 2010 and 2014, respectively.

Ok. That's it. You've seen everything. You won. Go outside.