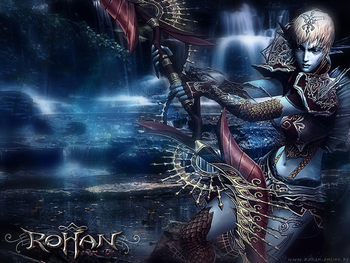 R.O.H.A.N. Online or R.O.H.A.N. Blood Feud, whose title stands for "Renaissance Of Human And Nature," is a free Korean/Japanese MMORPG that has been made available to international users since May 2008.
Advertisement:

Contrary to what you would expect from the name, has nothing to do with The Lord of the Rings. Its storyline involves a battle against the gods of the Celestial Castle of Rakhon who are out to destroy the world, but many players prefer the Player Versus Player aspect of the game, including the "vengeance" system which allows players who were PKed to teleport to their killer's location for a shot at payback.

There are seven races/classes so far in the game:

Dhans and Dekans differ from the other races through the ability to enter "assassination mode," which allows them to PK other players while hiding their identity from them for vengeance purposes (you show up as "Dekan" or "Dhan" in red instead of your regular name). The downsides are that you can't join parties unless they're members of your race in assassination mode, and you are kill-on-sight for the guards of the other towns as well as being able to be attacked by other players as if you were a regular mob without having to hold down Control when choosing a target to attack, just like you would if you were a "murderer" (a player who PKs enough times to have his name show up in red).

Rohan, in addition to that system and the standard MMO-style questing in Player Versus Environment gameplay, also has several unique features:

Rohan can be found at its own site