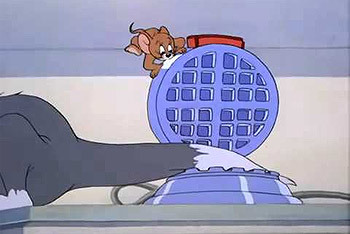 Attacking the tail for extra damage. Common in cartoons, especially for cats.

In video games, cutting off a creature's tail, especially a dragon's tail, often rewards you with a bonus weapon or crafting materials. In some cases however, you have to hit a creature's tail in order to damage it.

Not to be confused with attacking with tails.

Po tricks Tai Lung into biting his own tail.

Po tricks Tai Lung into biting his own tail.