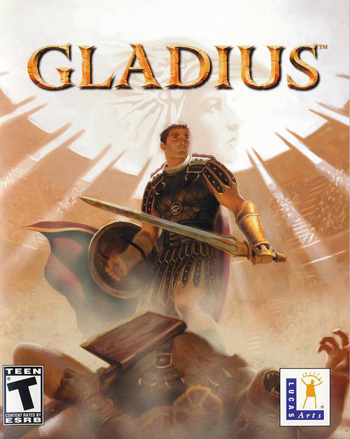 A turn-based tactical RPG developed and published by LucasArts and Activision and released for the Nintendo Gamecube, Playstation 2 and Xbox in 2003, Gladius focuses primarily on, appropriately enough, gladiatorial combat.

Playing as either Ursula or Valens, you aim to win the prestigious Caltha Tournament. However, you end up having to destroy Mortuus, the Dark God. You can recruit a roster from a very large selection of combatants. Because the number of recruitment slots are not enough to recruit one of each fighter, and the fact that some fighters work better with others, the game has great replayability. The arenas you fight in towards the Caltha Tournament are all unique, ranging from a simple pit in the ground for close quarters fighting, to a trench-like miniature roman battlefield, to palace gardens with lethal rotating statues. All of your units are completely customisable. The player can change any unit's (even the main characters) skin color, hair color and armor style, offering a nice personal touch to the team. Each weapon, shield, and helmet has its own unique appearance which shows on your character.

The gameplay is turn-based, with each character having his own turn speed. Facing, height advantage, and weight class all play a role in battle. The game also allows players to plan out their movements ahead of time, so fighters move during other people's turns.

The story ends with many unresolved plot points, but given its abovementioned low sales and LucasArts no longer existing as a developer, a sequel is unlikely.

Not to be confused with the similarly-spelled Gradius.