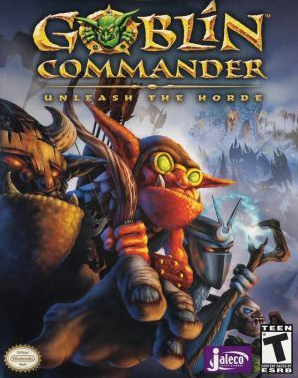 Goblin Commander: Unleash the Horde is a Real-Time Strategy game developed by Jaleco, and released on November 11th, 2003 for Xbox and Playstation 2, with the Nintendo Gamecube version following on December 16th, 2003.
Advertisement:

It is based around five Goblin Clans: Stonecrusher, Hellfire, Stormbringer, Plaguespitter, and Nighthorde. The story mode follows the path of the Stonecrusher Chief after the destruction of the mining caves the clan calls home. They then head out to contact the other clans only to find that they've been blamed for the disaster and loss of their master.