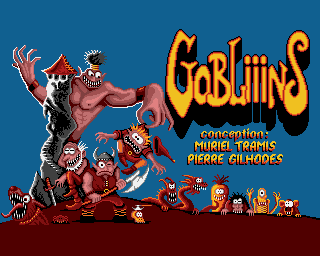 Gobliiins is an Adventure/Puzzle Game developed by Coktel Vision, published in the US by Sierra, and originally released in 1991. It spawned three sequels: Gobliins 2: The Prince Buffoon, Goblins 3 (aka Goblin's Quest 3), and the most recent one, Gobliiins 4, being released in 2009.

The first game is about three goblins (who are more like pixies or gnomes than your typical goblin), Dwayne, Hooter and Bobo who are respectively a technician (sometimes called a "thief" by modern fans), a wizard and a warrior. They are charged with finding a cure for their King, Angoulafre, who has become insane.

Gobliins 2: The Prince Buffoon is about two different goblins, Fingus (who looks the most human) and Winkle (who is purple and has a pterodactyl-like head) who have to find King Angoulafre's son who has been abducted by Amoniak, a demon lord.

Goblins 3 is about just one goblin, Blount (though the player usually controls both Blount and a sidekick character), a news reporter who investigates a conflict between two kingdoms over a giant maze. In the US, the game was renamed to Goblin's Quest 3 at the insistence of Sierra to market it as part of its Quest series of games like King's Quest and Space Quest.

Gobliiins 4 returns to the concept of Power Trio. The story is about the Detective Tchoup and his two buddies, Stucco, and Perluis, who are hired by King Balderon VIII to find his missing favorite pet, an aardvark named Riri.

Gameplay revolves around trying to figure out correct sequences of actions. In other words, you must perform action A on one screen object with one of the characters, then quickly switch to another character to perform action B at another location, and so on until the desired result is accomplished. Given the fantastical and downright bizarre nature of the world the Goblins live in, some puzzles require thinking outside the box, and may result in Guide Dang It!.

The original game complicated matters with a "health meter" that decreases each time a sufficiently bad mistake is made. This was dropped in later games, since experimentation can sometimes be the only way to figure out the correct action sequence.

Not to be confused with the webcomic.