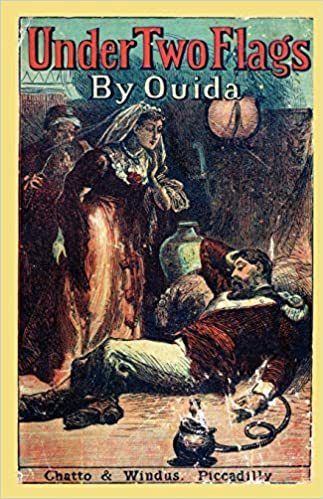 Bertie Cecil, who is called "Beauty of the Brigades", is a young nobleman serving in the First Life Guard as a cavalryman. He leads a comfortable, upper-class life full of hunts and horse races, surrounded by a large admiring circle of influential friends. The only faults in his life are that his family is bankrupt and his brother Berkeley has a bad gambling problem.

When he loses a bet on a horse race, he has nothing left but his brother – who signed a heavy bill with Bertie's name. Because he was with the 'titled and wedded' Lady Guenevere when the bill was signed, he has no way of proving that the signature is forged except with, at the same time, exposing Lady Guenevere. Such as to not ruin both Berkeley and Lady Guenevere's names, Bertie flees and joins the Chasseurs d'Afrique, where, after twelve years of service, he meets the fascinating camp-follower Cigarette as well as the ruthless Châteauroy, his commander, who is in love with Cigarette.

Her expressing interest in Bertie only worsens his treatment of the same, and the situation is made even more confusing when Princess Venetia Corona shows up, with whom Bertie falls in love after last having seen her when she was a very young girl.

Under Two Flags (1867) is one of the two most well-known works of English author Ouida, pen name of Marie Louise de la Ramée (the other is A Dog of Flanders) and spawned the genre of French Foreign Legion romances, the most famous of which is now Wren's Beau Geste, despite not even involving the French Foreign Legion.

It was adapted into four movies, the last of which starring Ronald Colman with Claudette Colbert as Cigarette, and an obscure comic book. The Goon Show play "Under Two Floorboards" is actually their version of Beau Geste, not this thing.

Under Two Flags contains examples of: