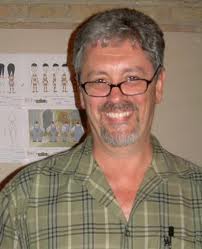 Meet Jon McClenahan.
"Jon McClenahan is one of the greatest animators alive today. You've just never heard of him because today's American animator is about as employable as a typewriter ribbon salesman. Which is a shame, really."
—Peter Paltridge on Jon McClenahan
Advertisement:

Jon McClenahan is an American animator, hailing from Chicago, Illinois.

Jon's career in animation began in 1980, when after four years as a meat-truck driver, he was told of a job opening at Hanna-Barbera's Australian offices. He and his family left for Sydney promptly to work at the studio. He started as an inbetweener, eventually climbing the ladder to direct the animation for animated adaptations for The Berenstain Bears and Teen Wolf.

His employment at HB Southern Star Studios (as it was called) ended in August 1987, when the studio was consolidated and sold off. After some time at Cioni Artworks, Jon started StarToons, his studio, located in Chicago. During this time, he did some of his best known works, including Tiny Toon Adventures (some Kennedy Cartoons animated episodes, and some of his own), Taz-Mania, and, ultimately, Animaniacs, for which he did most of the Slappy Squirrel shorts.

However, after completing work on the first season of Animaniacs, StarToons began sliding into a downwards spiral. Jon planned with one of his former background painters, an Indian named Uttam Kumar, to start an Indian animation house for StarToons (which was to be the first of its kind) only for Kumar to be found out as having undergone a Face–Heel Turn during that time. Later, after a management change at Warner Bros. Animation (his client for nearly all of StarToons' work), Jon tried to get on good terms with new president Sander Schwartz, only to be accused of shipping the work to an overseas studio just because it was so different from what StarToons usually did. This was the death knell to StarToons, and Jon McClenahan was on his own again.

After a brief stint at Germany's Munich Animation, he became a director at Midway Games until 2006. After that, he had a two-year stint at Star Farm Productions.

Now, since 2008, Jon McClenahan once again has his own company, named Mack Hammer Productions

, which mainly does storyboards and character designs for miscellaneous shows. However, he keeps a low profile, and he posts on the Toon Zone forums as Jonny Mack

. His most recent credit can be found in Space Jam: A New Legacy.

Interviewed a few years back on Platypus Comix

(which is where the page quote comes from). 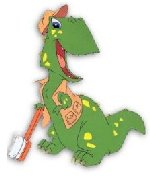 Dudley the Dinosaur is Jon McClenahan's most well known creation, a mascot for the American Dental Association. Dudley was the nation's first bilingual (English and Spanish) kids' public service campaign. He has starred in many commercials, beating Smokey The Bear as the most well-known public service campaign character, and ads have been in and out of production since 1991. The most recent short was Dudley's Grade School Musical

, released in 2012 and co-produced by Jon's Mack Hammer Productions. Besides directing and animating it, he also voiced one of the characters.

Dudley is not the only series of commercials that StarToons worked on, though; they did a Tiny Toons cereal commercial

of other commercials they've done.

Shows worked on by Jon McClenahan:

Not animated by StarToons but similar in style: