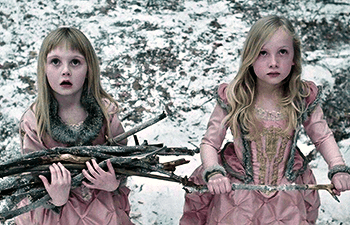 They wouldn't go out gathering wood in such fancy dresses, or even gather wood at all, if they could help it.
"I suppose most people would call me a failure and all my people failures now; except those who would say we never failed, because we never had to try. Anyhow, we're all poor enough now; I don't know whether you know that I've been teaching music. I dare say we deserved to go. I dare say we were useless. Some of us tried to be harmless."
— Elizabeth Seymour, The Tales of the Long Bow by G. K. Chesterton
Advertisement:

A character comes from the bluest of Blue Blood; they may be descended from royalty, or at least from the highest circle of aristocracy or Old Money. Their family name is loaded with history.

Unfortunately, that family name is pretty much the only thing they have left. The great estates have long since been lost or sold off, the servants have left (except, sometimes, for the Old Retainer), and the mortgage is due on the family castle. Whether by war, revolution, or simple bad luck, the noble dynasty is left penniless. This is often made worse by the fact that there are usually things their noble blood obliges them to spend money on: Clothing and other accoutrements befitting their roles; hosting the elite of society at lavish parties; or the upkeep on a needlessly large house that they cannot sell without shame. Worst of all, though some take the Fallen-on-Hard-Times Job, others feel that doing a hard day's work is beneath them, are legally forbidden to take up an occupation (at least any one that could make real money), or are incapable of making their own money. They feel obligated - or may even be legally obligated by their title - to preserve the Good Old Ways, although the author often disagrees with them about how good said ways really are.

The official term for this status is genteel poverty.

Often crops up in Arranged Marriage storylines, as rich merchant families would buy their way into high society by matching their daughter with the noble family's male heir. Impoverished noble daughters marrying a Self-Made Man is also a possibility, although less common since titles most often pass only through male heirs (the man can get only connections and not the title- though his children will get it). True love must face the bitter fact that a poor suitor or patrician is Unable to Support a Wife.

Not to be confused with Moses in the Bulrushes. Here the aristocrat (and generally everyone else) is all too aware of his heritage.

This is a more long-term version of Riches to Rags. It can occasionally lead to the Rightful King Returns. If the aristocrat deeply laments the situation, may be a Princess in Rags; otherwise can also be a Fallen Princess. The Gentleman Snarker's prodigal ways make him likely to end up as one of these. Can easily be Land Poor: in this case, the aristocrat does have (possibly extensive) estates but they're unprofitable to keep up and can't honorably be sold or disposed of.