Theatre / The Pirates of Penzance 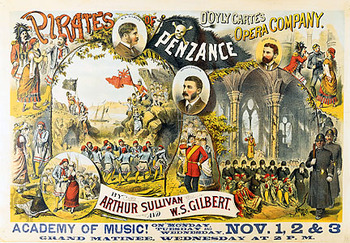 The Pirates of Penzance, or: The Slave of Duty is a famous and much-parodied (and itself redolent with parodies and lampshade-hanging) operetta by Gilbert and Sullivan, and one of the most famous works of 19th century English drama. The eponymous slave of duty is Frederic, who was accidentally apprenticed to a pirate ship when he was a boy, and felt honour-bound to be the best pirate he could be — but now he has come of age, and his period of apprenticeship is over, he feels honour-bound to round up a posse and wipe the pirates from the face of the earth. Due to a quibble, it turns out his apprenticeship hasn't quite run out after all. Hilarity Ensues.

Penzance was a prominent seaside resort town in Cornwall. Thus, the title sounds like "The Pirates of Malibu" would today.

One of the most widely-recognised bits of the operetta is the Patter Song "I am the very model of a Modern Major General", sung by the father of the obligatory love interest.

Two very different film versions were made in The '80s in the wake of a wildly successful New York City revival of the operetta. The Pirate Movie (1982) has a modern day teen heroine dreaming herself into the story as Mabel (Frederic's love interest); with light pop songs and pop culture parodies alongside the Gilbert and Sullivan material, it could be described as Pirates of Penzance meets Grease meets Airplane!. A film adapted from the aforementioned revival staging was released the following year with the original title, and starred Kevin Kline as the Pirate King and Linda Ronstadt as Mabel.