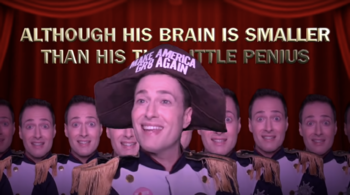 ♫ "Although his brain is smaller than his tiny little penius,
He is the very model of a very stable genius." ♫
"You know, this song is kinda dated. It's supposed to be modern major-general. I'm gonna add a new verse."
— Gordon Freeman, Freeman's Mind, Episode 45
Advertisement:

The Pirates of Penzance provides a lyric most redoubtable:
The Major General's song therein is reckoned Stock Shout-Out-able,
And Mr. Gilbert's verses, as a vehicle for parody
On many varied themes, are copied with particularity.
To demonstrate the actor's elocution and acuity
For rattling through fast-paced tongue twisters with full perspicuity,
Sir Arthur's tune is catchy, too — though some can't name the latter's song...

It's still become the model of the modern Filk or Patter Song.

Because the tune in question is so very recognizable
To make a Trope about it is a project not despisable—
And to be most laconic, any sort of Made of Win-full song
Is likely to be based upon the Modern Major Gen'ral Song

Although there is a convention in operettas to call songs by their first line, the title "The Modern Major-General" was given to the lyric by Gilbert himself in his 1890 collection of his Savoy opera lyrics, Songs of a Savoyard.

Nero Sings How Great of an Emperor He is. But the Warner's Turn the Song into how Nero Is a Terrible Emperor.

Nero Sings How Great of an Emperor He is. But the Warner's Turn the Song into how Nero Is a Terrible Emperor.