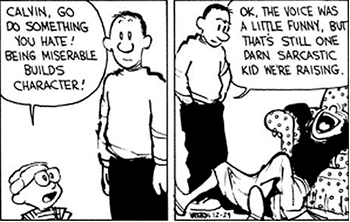 "Have you ever wanted to punch someone but couldn't because you were laughing too hard?"
— Adam Hills

Some lines are so good even the humorless can't help cracking up. Whether it be The Chessmaster's witty comeback, the Heroic Comedic Sociopath's cutting insult, the Naïve Newcomer's innocent (or the Deadpan Snarker's not-so-innocent) observation, or even an Incredibly Lame Pun that somehow manages to be humorous despite the sheer stupidity of it (or maybe because of its stupidity), though by all standards being really low hanging fruit, still makes for a surprisingly sharp and clever quip worth acknowledging, albeit often grudgingly.

Any joke that successfully Crosses the Line Twice will naturally receive this reaction from people who would otherwise cry "Dude, Not Funny!"; even if it will make you hate the person who made it, you'll certainly hate yourself more for laughing at it, because something so blatantly offensive has no business being this funny. Occasionally, even the target of an insult can admire the sheer comedy value of the joke, in which case it can border on Insult Backfire. May go hand-in-hand with Self-Deprecation jokes.

Compare Actually a Good Idea, Not So Above It All, The One Thing I Don't Hate About You, Touché, Not Bad, and Crosses the Line Twice. Contrast Tough Room; Dude, Not Funny!. Compare and contrast Too Funny to Be Evil, where the target of the abuse does not see it as humorous but everyone else does. See also Mexicans Love Speedy Gonzales.

In general, this trope is In-Universe Examples Only, but Real Life examples are allowed if the target of the joke thought it was funny: