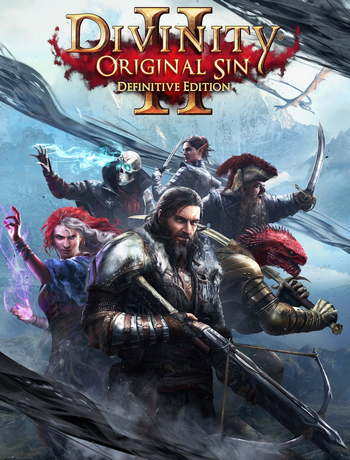 to attract additional funding, build up a player community early, and to sign Chris Avellone on as a stretch goal. The game was originally projected for release in December 2016, but having smashed through every single Kickstarter stretch goal with over $2M in pledges, delays were inevitable. It released on September 14, 2017, almost exactly one year after the first act of the game was released to Early Access by the developers. A Definitive Edition was released a year later on August 31, 2018, which fixed numerous bugs and addressed criticisms of the original release, alongside a release for Xbox One and Playstation 4 (with a Nintendo Switch version releasing a year after that). Like the enhanced version of the first Original Sin title, the Definitive Edition was given to owners of the original release for free.
Advertisement:

A few decades have gone by since Divine Divinity, and Lucian the Divine has passed away after winning the Great War against the Black Ring. His death has weakened the Seven Gods, however, who watch idly as monsters from the Void now threaten to overrun Rivellon. These "Voidwoken" are drawn to manifestations of the Source, so Bishop Alexander, Lucian's son and the new leader of his Divine Order, has decreed that all Sourcerers be corralled on a remote island of Fort Joy. You play as one of Fort Joy captives and have to band with the others to escape from the island before the Divine Magisters subject you all to a Fate Worse than Death. From there on, you uncover the mysteries of the Voidwoken, divinity, and the Source, in order to stop the Void from swallowing the whole world.

The Central Theme of the game is how your origins affect who you are and what chances you get in life, which is expressed in your main Player Character's origin story having massive impact on how others in the world treat you. You can play as either a fully-customized Featureless Protagonist with a generic background, or one of six pregenerated characters with intricate backstories and personal quests interwoven with the main storyline. Up to three of these can be recruited into the Player Party early in Fort Joy and each is just as capable of handling dialogue and story events as the "main" PC. This is further expanded in the innovative multiplayer mode, which allows all three to be controlled by other players, who are then free to aid or to interfere with you as they please. The much praised Turn-Based Combat system of D:OS also makes its return with a lot of added depth.

The game received several post launch DLC packs for free. These "gift bags" consist of polished versions of popular fan-made mods (allowing console players to utilize them) ranging from increasing the default movement speed, adding new customization options, new gameplay mechanics, and more. The first story DLC, titled The Four Relics of Rivellon, was released in 2020, adding new encounters to the existing maps with new bosses and the titular four new sets of armor, each with their own gimmicks. Like the gift bags, Four Relics is free for all owners of the game.

The game would get a follow-up with Divinity: Fallen Heroes, which stars the six Origin characters in a more tactics-focused game. In 2020, a prequel graphic novel titled Divinity: Godwoken was announced, delving into the backstories of the 6 protagonists in greater detail.