I Am What I Am 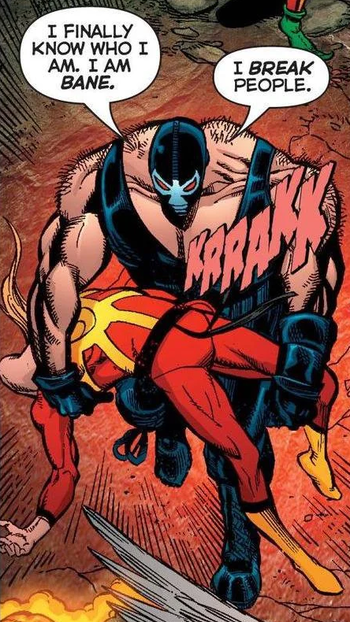 Often a character will be ashamed of some aspect of themself (or society insists they should be). It might have something to do with their heritage, such as being illegitimately born, half-demon or some other inheritance considered unfortunate by society. It might have something to do with their lifestyle—from being geeky to collecting belly button lint. Maybe they were forced into an Emergency Transformation which can't be undone, and have been bemoaning "What Have I Become?". They might have just learned they aren't who or what they thought they were and are in the middle of an Identity Breakdown. Or maybe it's an obstacle they face, like being handicapped, dyslexic or incapable of thinking rationally. Could even be a matter of love. Whatever the issue is, expect the character at some point to receive an epiphany that leads to them embracing whatever makes them different.

Often leads to a Moment of Awesome, an In-Universe Catharsis, An Aesop, or all of the above. If in a musical, expect a whole song to be given over to this, and it may be a Dark or Triumphant Reprise of the "I Want" Song. May result in a character repairing broken mirrors and defaced pictures of themselves. Due to its nature as a characterization trope that signals self-acceptance, confidence, and a certain degree of enlightenment, not to mention vanquishing inner demons, may be a rather spoilery trope. Where the character decides they're happy being a monster (although often Dark Is Not Evil) see Fully-Embraced Fiend.

Compare It's What I Do and I Am Not Him. If someone else needs to learn this lesson, they may be advised, "Be Yourself."

Not to be confused with I Am Spartacus or I Am Who?. Or "I am Who I am", which is the best translation that scholars can find for YHWH, the name of the Judeo-Christian God (the context of that quote isn't really an example of this trope either way).