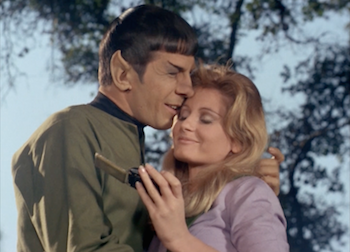 And then later, he beats the crap out of Kirk.
Advertisement:

AKA "The One Where Spock Got High On Spores And Smacked Kirk Around". Also, Kirk mispronounces 'sabotage'.

The Enterprise arrives in orbit of Omicron Ceti III, planning to recover the bodies and record the destruction no doubt left by the deadly, flesh-destroying Berthold rays. The Trio, plus Sulu, DeSalle and Kilowitz beam down to find, surprise! Everyone is alive and well. A little too alive and well. A quick check up by Bones shows the leader of the colony is healthier than he was when he left Earth. Apparently, Elias has been taking appendix growing lessons from David Lister. Oh, and yet another blonde bombshell is head over heels for Spock.

There are unusual things about this farm. On this farm they have no animals, e-i-e-i-o. With no chick-chick here, no moo moo there, not an oink, not a baa, nowhere a quack quack. And Kirk is so disappointed there's no horsies to ride! Well, he can always look at all the hoes... that the men are using to tend the fields with. According to DeSalle, they have grown just enough to sustain themselves.

Leila talks Spock into going flower picking with her. She shows him one particular flower. Leila, She's got Spock on his knees, Leila. Then he tells her "I love you."

These Tropes of Paradise: