We Will Use Manual Labor in the Future 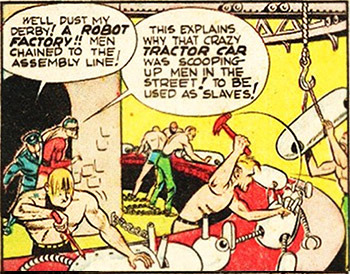 Redefining "bodybuilding".
Rygel XVI: As long as I get to keep my slaves.
Bobby Crichton: They're servants. They get paid. You don't own them.
Rygel: What? You're kidding. They come running when I call.
Bobby: The government wants you to feel at home.
Rygel: Then give me slaves.
— Farscape
Advertisement:

For what it's worth, there are some benefits to slavery which could explain its use in a futuristic setting. There are some jobs (namely skilled, management and service work) which are just too complex for any currently envisioned mechanical technology to do without some human assistance. What makes this trope appear blatant and unable to suspend disbelief is that futuristic slavery rarely involves these environments, but rather dangerous hard labour such as mining, repetitive industrial work and space construction work. In these environments, slaves are way too soft and inconvenient to provide for because of the biological fact that they get exhausted and need to sleep (and in Sci Fi space labour you have to invest in highly expensive and complex life-support biospheres for every single slave, defeating the purpose of cheap labour in the first place), and they also have much more dangerous intelligence and machinery at their disposal. A disgruntled slave who's a mad scientist, MacGyver-style improviser or C4 expert (or even one with just a pickaxe) is substantially more dangerous than one who works primarily with a hoe (not that you should write the latter guys off if you've got them in a pinch either).