Send in the Search Team 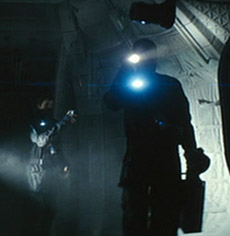 Story where a crew is assembled to find out what happened to a previous set of adventurers, a colony, a lost ship, etc. Occasionally, the original people have "gone native" in any number of ways. For whatever reason, the rescue does not go smoothly, and the rescuers find themselves struggling to save their own lives. Whoever the team is searching for is likely to be a Doomed Predecessor.
Advertisement:

See also Ghost Ship, which is somewhat similar. In video games, this is a way of showing up Late to the Tragedy. Shares a few elements with Ontological Mystery.

Note: This trope was previously named "Heart of Darkness", which is the title of a work and has its own article. Heart of Darkness is an example of a Doomed River Expedition.