Literature / Stranger in a Strange Land 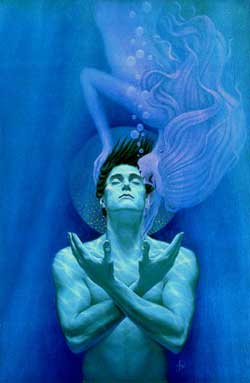 "May you never thirst!"
Advertisement:

Stranger in a Strange Land is an influential 1961 novel by Robert A. Heinlein, which won a Hugo Award. Though written well before the 60s, it was finally published in 1961note simultaneously with the legalization of the birth control pill, and just before the beginnings of what would eventually become the hippie movement because "the time was right". As a result, it had a huge, huge influence on the sexual and social revolution that followed. Two versions exist: the version originally published in 1961, heavily edited (more for length than for content) by Heinlein himself, and the 1991 "Uncut Original Manuscript" Edition, released posthumously.

The protagonist, Valentine Michael Smith, is raised on Mars by Starfish Aliens and travels to Earth where he learns how to be human, then rejects the irrationality of his warlike human ancestors and starts (what looks like, but isn't) a peace-and-love cult.

This book is the source of the word 'grok', which indicates a complete understanding of a person or idea, like Kant's Noumenon. As with A Clockwork Orange, Heinlein's new word spread into pockets of popular culture, often to the point that those using it do not recognize its provenance.

The book has never been out of print.