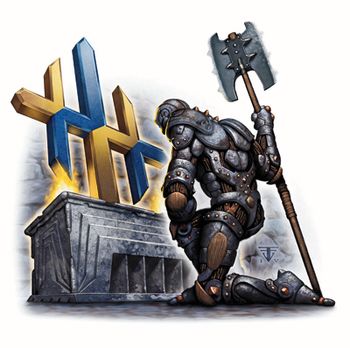 "Our Father, who wieldeth an axe, hallowed be thy name..."
"Not the regular Jesus, but one of the several space ones."
— Alt Text, Worst of the Time Lords #257

Any fictional religion, such as those found in a Medieval European Fantasy world, which possesses attributes stereotypically associated with Christianity (especially Roman Catholicism) — such as priestly vestments, nuns and their habits, confessionals, the designs of houses of worship, and crosses — but which centers on a deity other than the Christian God, like an animistic spirit or pagan-flavored god. Often there will be a God analog and/or a Satan analog but not a Jesus one, although this is somewhat excusable as Jesus himself is also God according to the precept of the Trinity.

In numerous cases, in order to finalize the separation, the deity worshipped is a goddess. In these cases, she is usually just called "the Goddess." (This may be based on the common use by neo-pagan religions of this term to denote the main female deity.)

In anime, these substitutions are intended for local flavor more than specific evasive metaphors or to avoid the Jesus Taboo. Western productions typically don't engage in this trope since they have to worry about offending someone; however, they may use Crystal Dragon Jesus as a satire on Christianity, in which case the offense is intended. They may also use it simply to use Middle Ages tropes without having to deal with Christianity directly. Also if one wants to use a religion that most people get the gist of, but want the setting to take place in a different world that isn't directly Earth (and thus it wouldn't make sense for the real Christianity, or any other of the Earth religions to exist), this trope is useful. For some, Crystal Dragon Jesus can be interpreted as a certain universe's projection of the omnipresent God Himself, if done right.

The name itself is a Dead Unicorn Trope as few writers are willing to literally use a Crystal Dragon (which would also be a Crystalline Creature), but it does get the idea of random in-universe creatures. Furthermore, there's the belief that new-age crystals do everything and it's convenient for writers who want to make a Christ figure come across.

There are also a few Crystal Dragon Mohammed religions. They generally share at least a few of these attributes: militant expansionism, coming from the east, and staunch monotheism.

Sub-Trope of Fantasy Counterpart Religion. Compare: Anime Catholicism, Nuns Are Miko, Hijacked by Jesus, Faux Symbolism, Interfaith Smoothie, King of All Cosmos, Fantasy Pantheon. See also You Mean "Xmas", God of Good, and God of Evil. Not to be confused with Fantasy Counterpart Culture Christianity; a key element of Crystal Dragon Jesus is that it keeps the trappings of Christianity but substitutes a markedly different being in the deity's role. Also not to be confused with Church of Saint Genericus, which is about churches whose denomination is unmentioned to avoid audience alienation/distraction. Is usually the center of a Physical Religion.

It's always A Good Name for a Rock Band.