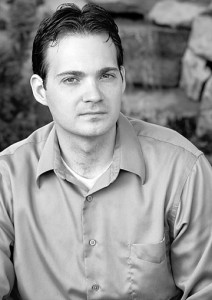 We writers need not make sense. It’s beneath us.
Brandon Sanderson (born December 19, 1975) is an American fantasy author. He is oft-acknowledged for his Mistborn and The Stormlight Archive series. He is also widely known for being selected to finish The Wheel of Time saga after the death of Robert Jordan.
Advertisement:

His works are famous for their strict and innovative rules-based magic systems. Often quoted for his First Law: "An author's ability to solve conflict with magic is directly proportional to how well the reader understands said magic."

He has released thirty novels since his 2005 debut Elantris, plus fifteen novellas and a number of short-stories. The Stormlight Archive in particular are enormous Doorstoppers which are published at a similar rate to his shorter books (which are generally 500-600 pages themselves). He plans to be even more prolific in the future, having at least 27 more novels plannednote two Elantris sequels, a Warbreaker sequel, six more books in The Stormlight Archive, six more Mistborn books, seven other Cosmere books, two more Skyward sequels, a sixth Alcatraz book, and a sequel to The Rithmatist..

He also heartily embraces New Media to the point of providing his own blog, participating extensively in fan forums, releasing several ebook test balloons, and making his own write-your-own-novel Podcast Writing Excuses, co-moderated by his friends Howard Tayler (writer and artist of Schlock Mercenary), Dan Wells (author of the I Am Not a Serial Killer horror trilogy), and Mary Robinette Kowal (author of Shades of Milk and Honey and numerous short stories). He also cofounded an audiobook company, Mainframe, with Max Epstein, with their first project, The Original, being released in 2020.

In 2022, Sanderson revealed that he had written four secret novels during the pandemic, launching a Kickstarter to fund them. Within a few days, it became the most successful Kickstarter of all time.

for lots of cool info about his works. Check out fan-forum 17th Shard

for all your Brandon-obsession needs. He also has a YouTube channel

There are also a number of short stories available (mostly on his website) for readers to enjoy. These include tie-ins to his larger works as well as stand-alone short stories in both science fiction and fantasy. Cosmere stories are listed above.

Jason Write is a psychic member of the Phone Company, humanity's only source of FTL communication. He arrives at Evensong, the farthest human space habitat, for a routine pickup, to find things aren't as simple as they seem.

Dennison is a military commander, trying in vain to be as strong as his brother.

Skip has the magical talent of smelling incredibly delicious to dragons, and a separate one of automatically hearing the punctuation and spelling in a spoken sentence. His life is not a pleasant one.

The Hope Of Elantris

A short story taking place near the climax of Elantris, outside the perspective of the three viewpoint characters from that book.

A prequel story to Mistborn The Final Empire, covering Kelsier's training as a mistborn.

A story from an anthology, following the technology behind mechas.

Kairominas the First of Alornia, Keeper of the Seventeen Lanterns, Master of Ultimate Lancing, Slayer of Galbrometh, rules over his world completely. It took him hundreds of years, but he conquered it with his own might and strength. He is the undisputed lord of all he sees.

Then his tenders call to tell him he needs to go on a date.