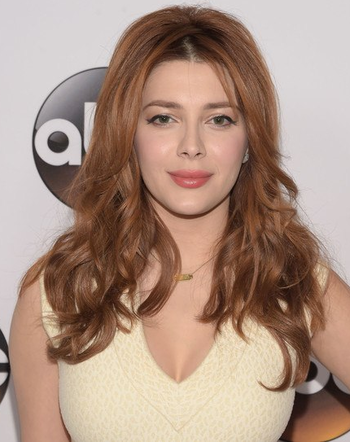 "Beautiful you are. Yeah, you I choose. I look to the stars for a girl like you."
Advertisement:

Satine started young, being part of a pop-group called Negrebi at the ripe old age of five. At the same time, her family moved from Tbilisi in Georgia to Sochi in Russia, where she would be a record-holder: The youngest ever performer to headline a festival, at the age of nine. In 1998, she went with her mother on a business trip to New York City, but snuck away to audition for a local arts school, which she earned the admission pretty much immediately. She convinced her parents to let her stay and study in the US, thus leading her to move there and graduate the arts school at age 16. She continued her Dramatic Studies in Russia soon after.

Satine ended up with a TV role about five years later, with her debut role as Nadia Koslov in Cold Case, which was the start of a few onscreen deaths. She would end toiling in the more obscure reaches of the media, including small appearances here and there in series such as Smallville and Agents of S.H.I.E.L.D..

This was, of course, before she starred as Louise Ellis in the fourth season of Revenge. She started out as a recurring character, but soon rose to the rank of series regular. This momentum would lead into her role as Judith Campbell, the mistress of John F. Kennedy, in Timeless. Though she only appeared in one episode, her star began to shine even brighter. This would lead to 2017, where her biggest year would occur as she participated in three projects, but one was more well-regarded over the other two: Dreamer from The Gifted. As Dreamer, she was basically the most beloved character on the show. This, despite appearing in a only a select few episodes, ended up increasing her popularity by a good amount.

In 2013, Satine and The All-American Rejects lead singer Tyson Ritter got engaged, then married. In the meantime, they both made a short-lived Web Original Cooking Show called Cooking with the Sophisticates.