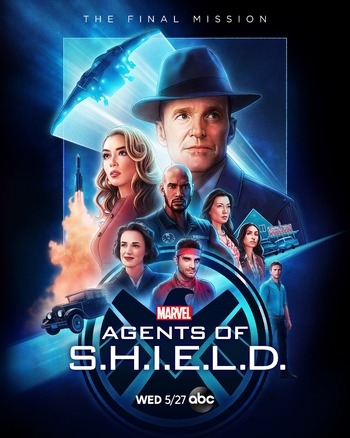 "We are not agents of nothing, we are agents of S.H.I.E.L.D., and that still carries weight!"note  Clockwise from top right: Phil Coulson, Melinda May, Yo-Yo Rodriguez, Leo Fitz, Deke Shaw, Jemma Simmons, Daisy Johnson, and Alphonso "Mack" Mackenzie.
"Nick Fury gave me this badge. When he did, I swore an oath, we all did. To serve when everything else fails, to be humanity's last line of defense, to be the shield."
— Agent Phil Coulson
Advertisement:

This is a show that, like its central character, refuses to die.

The series began with the agents investigating and containing various supernatural and high-tech objects and individuals in order to keep the public safe, a task that has become more complicated in the aftermath of the Battle of New York blowing the lid off of their previous level of secrecy. The status quo was upended midway through the first season, when S.H.I.E.L.D. was dissolved after it was revealed it was compromised by the terrorist group HYDRA since their inception. The series subsequently follows Coulson as his team struggles to rebuild the organization from its remaining loyal elements, even as they are being hunted by the U.S. Army, HYDRA, and other hostile forces of the Marvel Cinematic Universe, as Terrigen Mists empower latent Inhumans and threats both supernatural and extra-terrestrial enter the fray.

While the previous Marvel Cinematic Universe films focused on Marvel Comics characters who already existed in the comics themselves, Agents of S.H.I.E.L.D. focuses primarily on characters original to the MCU, though there have been an increasing number of crossovers with comic and MCU characters, and several episodes have been direct follow-ups to the films. A comic book series with the Marvel 616 versions of the team ran from December 2014 to November 2015; a second one (bearing the same title as the show) launched as part of the All-New, All-Different Marvel initiative in January 2016.

A sixth season was officially confirmed in May 2018, with plans for a reduced 13-episode run put into place instead of the usual 22. A mere six months later, ABC confirmed that the show would conclude with a seventh and final season comprised of another 13 episodes. The last episode of the series aired on August 12, 2020.

After the release of Avengers: Endgame, the shows' canonical status was left up in the air for both fans and at Marvel Studios, and it continues to be as of 2022. The reason for this is because seasons six and seven appear to contradict the MCU's timeline, as the writers had almost no heads-up on Endgames' events to preserve the secrecy of the film; instead choosing to make an original story, rather than predict what the events of Endgame were. As such, it has the distinction of being one of two MCU shows to not be a part of the timeline section on Disney+, not to mention being listed under the "Marvel Legacy" banner with other non-MCU Marvel works such as the X-Men film franchise and Sam Raimi's Spider-Man Trilogy. It's unclear if the show is Canon Discontinuity, or if it's going to be adapted in Broad Strokes later on, especially since WandaVision and Doctor Strange in the Multiverse of Madness both prominently feature the Darkhold; a very big part of this shows' fourth season.