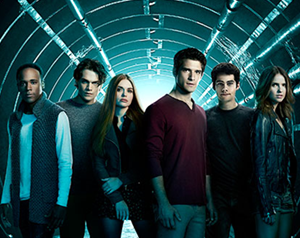 Main cast of Season 6. From left to right: Mason Hewitt, Liam Dunbar., Lydia Martin, Scott McCall, Stiles Stilinski, Malia Tate.
"Be a man. Be a wolf. Not a Teen Wolf. Be a werewolf."
— Stiles
Advertisement:

Teen Wolf was revamped in 2011 by MTV as a TV series. Key elements of the story were changed as the series takes a different route from the original film, with a Darker and Edgier tone more oriented to supernatural horror, more focus on emotional drama and angst, and a steadily more expansive lore of werewolves and other supernatural creatures.

The series revolves around social outcast Scott McCall (Tyler Posey), a young lacrosse-playing student at Beacon Hills High. Scott's life drastically changes when he is bitten by a werewolf, which in turn transforms him into one of these mythical creatures. He must henceforth learn to balance his problematic new identity with his day to day teenage life. The following characters are instrumental to his struggle: Stiles Stilinski (Dylan O'Brien), his best friend; Allison Argent (Crystal Reed), his first girlfriend, who comes from a family of werewolf hunters; and Derek Hale (Tyler Hoechlin), a mysterious werewolf whose history is intertwined with the Argents. Throughout the show, Scott strives both to keep his loved ones safe and maintain the relationships and secrets he shares with each person around him.

The theme of "finding your place" is a prevalent undertone that is mirrored by the pack mentality of the werewolves. Lycanthropy is used as a metaphor for adolescence — disconcerting body changes, alarming and hard-to-control urges, etc. — while packs can stand both for cults and gangs on the negative, and close-knit families and circles of friends on the positive side.

Has a Character Sheet. It's unlocked again albeit this may be temporary. Now has a Recap page!

Seasons 1–4 are available on MTV.com. The series concluded its sixth and final season in late 2017. A film of the series is set to premiere on Paramount+ in 2022, with Tyler Posey, Crystal Reed, Tyler Hoechlin, Holland Roden, Colton Haynes, Melissa Ponzio, J.R. Bourne, Shelley Hennig, and Dylan Sprayberry all set to return.

Spoilers are whited out only for the final season, so beware.

Stiles sees Malia showering in the boy's locker room, but she doesn't mind the intrusion and her modesty is preserved by the steam from the scalding shower.

Stiles sees Malia showering in the boy's locker room, but she doesn't mind the intrusion and her modesty is preserved by the steam from the scalding shower.