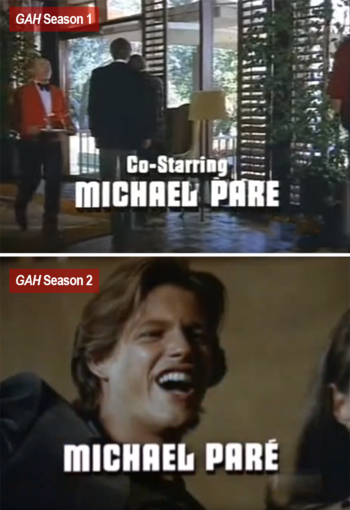 Michael Paré celebrates his promotion to the opening titles, and the spelling correction that came with it.
Advertisement:

This is when a Recurring Character finally achieves a high enough level of screen time and plot relevance to get added to the show's Title Sequence. Generally this is the most preferred method for someone new to be added to the main cast; when a character is created wholesale and put straight into the titles, it tends to be contrived to some degree, usually a replacement character or a response to a drop in ratings, while a Promotion to Opening Titles mostly happens because the fans and/or the creators of the show really like the character. Breakout Characters do this a lot.

Often marks the beginning of the show's decline if the writers are only doing this because they're out of ideas or it's poorly executed.

Has the interesting side effect of giving a newly-promoted character a certain amount of Plot Immunity. If you see a new character in the opening credits, chances are high that they aren't going to be killed off any time soon (unless that was the whole reason for the "promotion"). Writers may also have always intended for the character to be a Sixth Ranger or do a Heel–Face Turn but not put them into the opening until they actually join to avoid spoilers in the opening.