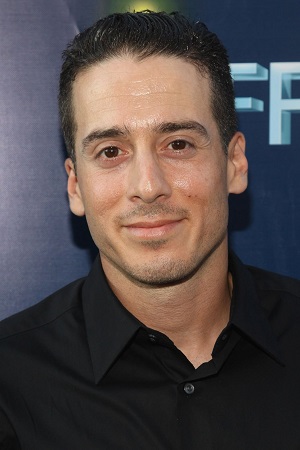 Kirk M. Acevedo (born November 27, 1971 in Brooklyn, New York) is an American actor of Puerto Rican/Chinese descent. Born and raised in the Bronx, Kirk spent most of his formative years hanging out in New York City and received his BFA from SUNY Purchase and founded a theater company called The Rorschach Group.
Advertisement:

After guest-starring on several television shows like New York Undercover (1994) and Law & Order (1990), he landed his best-known role as Miguel Alvarez, a morose and violent prisoner struggling for redemption on HBO's notoriously gritty Oz (1997). Though he was nominated for a Cable Ace award and an ALMA award for his work on Oz (1997), it was Acevedo's role as Pvt. Tella in The Thin Red Line (1998) that won him an ALMA.

Since Oz and Band of Brothers, Acevedo has been a regular face on television and film with regular roles on Sci-Fi cult show Fringe and the acclaimed but short-lived Prime Suspect (US) remake.

He is married to Kiersten Warren and they have one child.