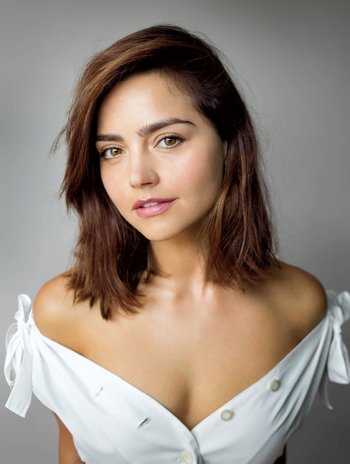 "I knew when I was 10 that I wanted to act full-time."
Advertisement:

Jenna Coleman (known before summer 2013 as Jenna-Louise Coleman) is a British actress, born in Blackpool on 27 April 1986.

She is best known for playing companion Clara Oswald on Doctor Who alongside Matt Smith's Eleventh Doctor, and later alongside Peter Capaldi's Twelfth Doctor. She made her first appearance as Clara in the mid-series 7 Christmas Episode. She actually first appeared in the series 7 opener "Asylum of the Daleks" as a character named Oswin Oswald, in the most successfully guarded secret in series historynote Despite the episode receiving multiple advance screenings and being sent out to media for review, everyone respected showrunner Steven Moffat's request to keep Coleman's Early-Bird Cameo secret.. (How Oswin and Clara are connected form the major arc for the second half of Series 7.)

Some of her other roles include Jasmine Thomas in Emmerdale, Lindsay James in Waterloo Road, Connie (one of Steve and Bucky's dates at the fair) in Captain America: The First Avenger, and the voice of Melia in the English dub of Xenoblade Chronicles.

Coleman played Annie Desmond in the 2012 miniseries Titanic, one of many productions dedicated to the 100th anniversary of the sinking of the Titanic. In 2013, she enjoyed her first full year as a Doctor Who companion and appeared in Dancing on the Edge, a series about a black jazz band in the 1930s. She also portrayed an older Lydia Wickham in the 2013 BBC adaptation of P. D. James' detective novel Death Comes to Pemberley.

After leaving Doctor Who in 2015, Coleman took the leading role of Queen Victoria in the ITV miniseries Victoria that began airing in the UK in the summer of 2016 and aired in the US as part of Masterpiece Theatre in early 2017. A ratings hit in the UK and reportedly one of PBS' highest-rated dramas in 20 years, a second series and 2017 Christmas special was swiftly commissioned, with a third confirmed for 2018. Rumours also continued to swirl around whether she may return to Doctor Who at some point, given the open-ended nature of Clara's exit and some comments made by her former co-star Peter Capaldi during convention appearances in mid-2016, and Capaldi's subsequent announcement that he was leaving Doctor Who at the end of 2017. In early 2018, Coleman took a hiatus from Victoria to film the lead role in a four-part BBC miniseries adapting Helen Fitzgerald's crime novel, The Cry. In 2020 she reprised her role as Melia in Xenoblade Chronicles: Future Connected, much to the pleasant surprise of the fans, and played Marie Andrée Leclerc in The Serpent. She is set to play Johanna Constantine in The Sandman (2022), and again returned to the role of Melia in Xenoblade Chronicles 3.

Tropes associated with this actress's works include: