Series / Tales of the Gold Monkey 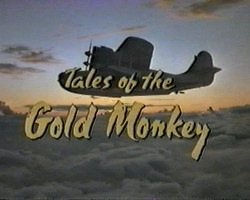 It had the romance of the 1930s, the bigger-than-life hero with the leather jacket, and the elements of intrigue of that time period. It was a lot of fun. That plane [the Goose] was a magic carpet and it could take you anywhere.
— Director Donald A. Baer on the show
Advertisement:

Tropical islands, high-flying adventure, political intrigue, "talking" dogs and legends come alive! This is the world of Tales of the Gold Monkey, a one-season adventure series that aired on ABC in 1982. Set in the mythical South Pacific island of Bora Gora (in the equally mythical Marivellas archipelago) in The '30s, it follows the adventures of Jake Cutter, pilot of a Grumman Goose flying boat named Cutter's Goose, his one-eyed canine sidekick Jack, and his various allies and associates as they battle the villainous schemes of Princess Koji and other ne'er-do-wells. Jake, a former Pan Am pilot and former member of the Flying Tigers American Volunteer Group, just wants to settle in to a quiet life as a legitimate pilot-for-hire. Needless to say, adventure tends to find him.

An early Belisarius Production, it shares many of the traits common with his works, such as action/adventure, Camp, Rule of Cool, and a former military protagonist (Jake Cutter, former Flying Tigers AVG pilot) who narrates his own life through an inner voice. It ran for but a single season (Sept. 1982-July 1983) for a total of 21 episodes, counting the 2 hour pilot, but built up a large cult following that kept circulating the tapes for decades before it finally made its way to DVD in 2009 (UK/Australia) and 2010 (US/Canada). While many assume the show was a Spiritual Successor of Indiana Jones, Bellisario originally pitched the idea in the late 1970s and always claimed the inspiration to be the 1939 film Only Angels Have Wings.

While short-lived, Tales of the Gold Monkey was critically acclaimed (winning several Emmys) and had a notable influence on future shows, including the animated Spiritual Successor Disney's TaleSpin and Affectionate Parody Archer Danger Island.