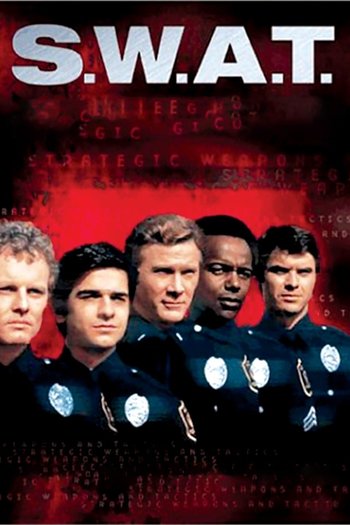 Left to right: Officer T.J. McCabe (James Coleman), Officer Dominic Luca (Mark Shera), Lt. Dan "Hondo" Harrelson (Steve Forrest), Sgt. David "Deacon" Kay (Rod Perry), Officer Jim Street (Robert Urich).
"When you're in trouble, you call the police. When the police are in trouble, they call in S.W.A.T.!"
"S.W.A.T. is elite. We're very particular about who joins the fraternity. The regular jobs are handled by the street cops. When it's big, when it's an emergency, when it's unique... that's when we're called in."
— Lieutenant Daniel "Hondo" Harrelson, "The Killing Ground"
Advertisement:

The series was notorious for its violence, which led to its early cancellation in its second season. However, its theme music is a classic that became a #1 hit single. Combined with the show's title sequence, where the cops jog in lockstep to grab their rifles and get to their transport van, this was the epitome of 1970s American TV cool.

The show was later given a film adaptation in 2003 starring Samuel L. Jackson, Colin Farrell, Michelle Rodriguez and LL Cool J and featuring a cameo appearance by Forrest. Courtesy of CBS, a TV series revival premiered on November 2, 2017, with Shemar Moore leading the new cast.