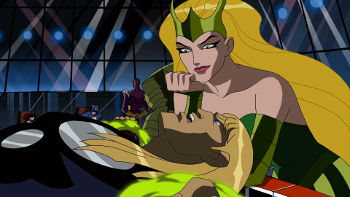 What business doth an Asgardian enchantress have providing assistance to a simple mortal terrorist? The opportunity to have Thor.
"Sure, women like me swoon for a hero, but that's only because deep down, we think we can change them."
— Sabine, The Order of the Stick
Advertisement:

The Evil Empress wants a consort for her domain. Unfortunately, none of her male subjects are quite up to her standards. So what does she do? Kidnap the hero, of course. Once he sees how hot she is, and how they can rule together, he'll fall into her arms.

Unfortunately for the villainess, this never seems to work out. Occasionally, the hero will be forced to play along temporarily, but in the end, he will always escape the villainess' clutches and leave her all alone and lonely...until the next time she manages to finagle him into her arms.

The villainess in question is often The Vamp and/or Daddy's Little Villain. If the villainess is more interested in having a male Sex Slave rather than a consort, the next step is always a Gender Flip of I Have You Now, My Pretty. However, this trope can sometimes result in a Sex–Face Turn...

A Sub-Trope of Villainous Crush. A Sister Trope to Dating Catwoman (if the hero actually returns her affections), All Amazons Want Hercules, Single Woman Seeks Good Man, and I Love You Because I Can't Control You. The alignment-flipped Sister Trope of All Girls Want Bad Guys.

Compare Heroes Want Redheads. Contrast with Mad Scientist's Beautiful Daughter, since the villain is unwilling to renounce her evil ways to woo the hero.