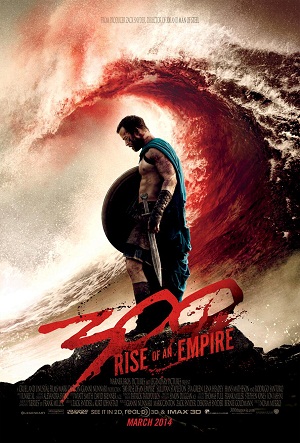 300: Rise of an Empire is the film sequel to 300, directed by Noam Murro and written by Zack Snyder and Kurt Johnstad. It was released on March 7, 2014 after lingering seven years in Development Hell. It is based on Xerxes, the then-unpublished sequel to the 300 graphic novel (which would eventually be published in 2018), both written by Frank Miller for Dark Horse Comics. Junkie XL composed the soundtrack.

It covers the Second Greco-Persian War in the aftermath of the battle of Thermopylae, with particular focus on Xerxes, his ally Queen Artemisia

(Eva Green), the female commander of the Persian fleet, and the naval battle of Salamis

(Sullivan Stapleton) and the Athenians, and Callisto (Jack O'Connell). Rodrigo Santoro, Lena Headey and David Wenham all reprise their roles from the first film.

The trailer can be found here

300: Rise of an Empire provides examples of the following tropes: