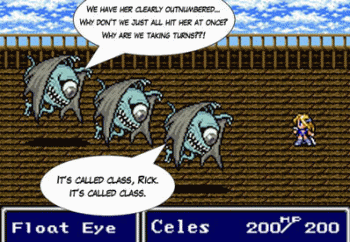 "Oh, put the guns down. Is this the first day on the job or something? Look, this is how it goes: you attack me, one at a time, and I knock you out with a single punch. Okay? Go."
— Nigel Powers, Austin Powers in Goldmember
Advertisement:

But becoming a mook is much harder than it looks. On TV (and in video games), humility is only the first step in a fighting code of mooks's honor, as complex and rigid as that of the medieval knight or the samurai. This is why most mooks fare about as well as a bunch of knights or samurai would when faced with a modern army. The principles of the code are:

Strangely enough, an army of Ninja — despite being dishonorable sneaks — will follow Mook Chivalry as if they were samurai. Due to Conservation of Ninjutsu, a small group of ninja will behave dishonorably, and actually attack from cover, retreat, and so on, but large ninja forces will be made up of Highly Visible Ninja.

There are several reasons for this trope. Beyond giving the hero a fighting chance, one big one is to make fight scenes simpler and easy to follow - a huge rush with large numbers of enemies or a scene where mooks spend all their time carefully exploiting cover is hard to choreograph in a clearly-comprehensible fashion, while it's easy to understand the hero beating up mook after mook in succession. In videogames, this is often the result of technical limitations (when games can't display large numbers of enemies at once, or when AI for using cover properly isn't available) or for the sake of gameplay (when fighting large numbers of enemies at once wouldn't be fun, or when things like open communication or challenges are necessary to help the player understand what's going on). To accomplish this, they typically use a development trick known as "Unit Slotting" where the enemy AI has a limited number of "slots" for enemies to directly attack you, while the rest just stand around or pelt you with ranged attacks. This trick allows the player to be confronted with a large amount of enemies while still having the chance to win, and feel like a total Badass in the process.

See also No Sneak Attacks. If it suddenly comes into play with a pack of enemies who previously were winning because they attacked together, see also Monster Threat Expiration. Contrast Zerg Rush.

...and all swarm him once the fight breaks out.

Disappointingly, they then proceed to do exactly that, playing this trope straight.

Chris and Meg Griffin end up earning the hatred of their classmates when Brian writes an insensitive blog post. While trying to eat their lunch in the Cafeteria; they end up getting into a fight.

Chris and Meg Griffin end up earning the hatred of their classmates when Brian writes an insensitive blog post. While trying to eat their lunch in the Cafeteria; they end up getting into a fight.