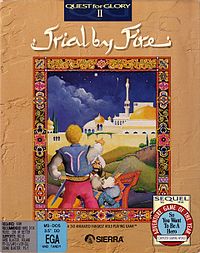 Oh, which way to Shapeir? Thanks, Hero.
Quest For Glory II: Trial by Fire is the second game in the Quest for Glory series. Following his victory in the first game, our hero travels with the Katta innkeepers Shema and Shameen and the traveling merchant Abdulla Doo to the desert land of Shapeir. At first glance all seems well: Shapeir is a thriving city-state in the midst of the desert ruled by a wise and generous Sultan.
Advertisement:

However, a year before the Hero's arrival Shapeir's sister-city Raseir was taken over, and a cruel new regime imposed, supposedly led by Ali al-Din, the brother of the former Emir. Rumors of a Man Behind the Man circulate, and a magical force serves to both keep the powerful enchantress Aziza from seeing what is really going on in the city and also repels armies sent by Shapeir to reclaim it. And even though the old Emir is supposed to be dead, no one has ever seen his body...

Between the fate of Raseir, the dark omens that warn about something terrible coming, and the strange magical beings that start attacking the city, it soon becomes clear that Shapeir needs a hero just as much as Spielburg did. The hero must rise to fulfill an ancient prophecy by mastering the elements themselves and saving the world from possible doom.

The game is set in a land inspired by the Arabian Nights and similar myths, and later received a Fan Remake with VGA graphics.