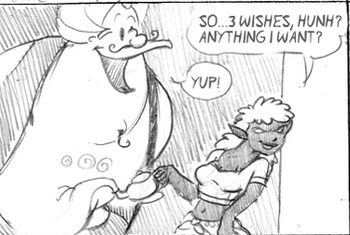 "In any story worth tellin', that knows about the way of the world, the third wish is the one that undoes the harm the first two wishes caused."
— Granny Weatherwax, A Hat Full of Sky
Advertisement:

In most fiction, inanimate wish-granting objects (such as wishbones and birthday candles note though a monkey's paw is a notable exception.) tend to grant only one wish. But when you're fortunate enough to find a living creature that can grant wishes, you'll most likely receive three of them.

When presented with three magical shots at anything they want, most fictional characters react thus:

Related to the Rule of Three. For this to work, the person with the wishes has to not be Genre Savvy enough to know to use the first wish to wish for the knowledge and wisdom to know what to use the last two wishes for. Kind of a Dead Unicorn Trope, as the origin of the rule is not from the original Aladdin story in Arabian Nights, the genie does not have a limit on wishes; he just only got to three before the lamp was stolen, nor do Djinns in Arab mythology have a limited number of wishes in folklore. The oldest known movie in having the "three wishes" rule is probably The Thief of Bagdad (1940) making this trope Newer Than They Think.

See Mundane Wish when one of the wishes (typically the first one) is spent on something trivially minor. See also Be Careful What You Wish For, Wasteful Wishing. Can easily become a Story-Breaker Power if restrictions are loose; i.e being allowed to wish for more wishes or being allowed to write out long, elaborate wishes that string together dozens of unrelated things, thus effectively giving yourself unlimited wishes.

Also, as the Genie in Aladdin stresses, "IXNAY on the Wishing for More Wishes!"

Note that when the last wish is not a Reset Button, it can often be used for Freeing the Genie.

Being the genie of the lamp, Erazor Djinn grants three wishes to anyone who has his lamp.

Being the genie of the lamp, Erazor Djinn grants three wishes to anyone who has his lamp.