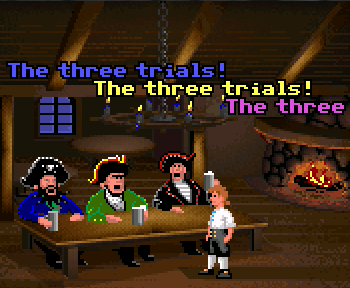 And then ye must drink grog with us!
Advertisement:

A common trope in Adventure Games where the hero must achieve three specific goals in order to advance the plot. Bob may want to fight the dragon and save Alice right now, but the giant lizard safety inspector has made it clear that he must first find a magic shield from the haunted forge, a spray can of dragon repellent from the future, and a helmet in spite of the mad king's ban on headwear. Whether true or not, the hero is almost always given the impression that the tasks may be completed in any order.

In linear adventures, it'll often turn out that inventory acquired in pursuit of quest object A is required to attempt to get quest item B. In the worst-case, the trope devolves into a fetch quest submitted in triplicate.

Although mainly a video game trope, the narrative power of Three invokes this often enough in other media.