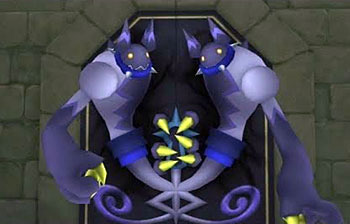 Solicitors will be knocked out cold...unless it's Girl Scouts.
Advertisement:

Gates are important, protecting entrances to regions, cities, strongholds, portals, treasure, etc. and thus must have a guardian to protect them. These guardians can be solitary or numerous, human or animal, normal or mystical, but will always serve as a tough impediment to any who try to cross the gate uninvited.

If one desires to pass through them, one might need to beat them up in a fight, either to incapacitate them or prove to them that he's strong enough to pass. Or one may need to answer their questions or quizzes the right way. Or one may just bribe them with the right amount/thing.

Supertrope to Angry Guard Dog, and not to be confused with Threshold Guardians, although a gate guardian can also be one of those. A gate guardian often invokes You Shall Not Pass! by nature of his job. Related to NPC Roadblock. Compare and contrast Locked Door and Kill Enemies to Open.