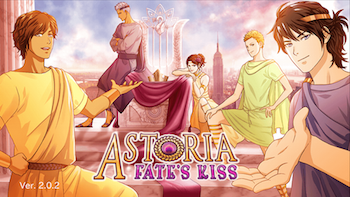 Astoria: Fate's Kiss (originally released as Labyrinths of Astoria) is a Romance Game Visual Novel by Voltage Entertainment USA, the American subsidiary of Voltage, Inc.. In it, the player takes the role of an agent of the Hell and Earth Relations Agency - more commonly known as H.E.R.A. - an organization which manages the activities of the gods and godly monsters of Classical Mythology in the modern world.
Advertisement:

Though she's thus far only worked behind a desk, the protagonist is keen to earn a promotion to field agent. So when, on a day like any other, her path happens to cross that of not just one but several godly monsters (and one actual god!) in need of her help, she doesn't hesitate to get involved.

The visual novel follows any of several individual paths, depending on whose case the player decides to take; each path is broken into three segments, with decision points at intervals that determine whether the story concludes with a relatively happy Thrilling End or the extra-happy Passionate End. "POV" chapters can also be unlocked at the ends of the first and second sections of the main story, showing a glimpse of the love interest's side of the story.

The app was released in July 2015 for iOS and Android devices. It was retitled from Labyrinths of Astoria to Astoria: Fate's Kiss in October 2015, upon the completion of the Season 1 story release schedule. In 2017, the original version of the app was discontinued and the title incorporated into Voltage USA's Lovestruck app.

In June 2018, the Fate's Kiss setting was revived via Lovestruck in Astoria: Lost Kisses, a new series featuring the adventures of the game's heroine and main cast set between the first and second seasons of the original game's routes.