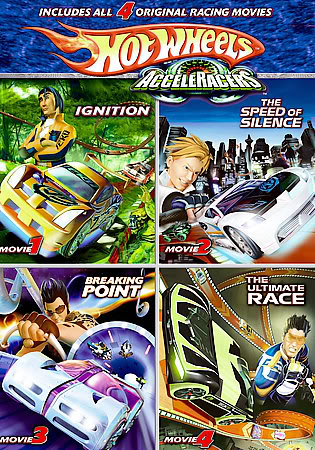 Live to drive, drive to survive!
"Wisdom is a circle, Dr. Tezla. What you receive... you must give back."
— Vert Wheeler
Advertisement:

Hot Wheels: Acceleracers is a CGI-animated saga created by Mainframe Entertainment, known for the Genre Launch of CGI animation after creating ReBoot, and endorsed by Mattel, creator of the Hot Wheels toy franchise on which the films are based. The movies ran as specials on the Toonami block of Cartoon Network.

Continuing after the events of Hot Wheels: World Race, former multiversal grand prix competitors turned street racers, Vert Wheeler, Taro Kitano & brothers Kurt and Markie Wylde find themselves teaming back up with Dr. Peter Tesla. Gelorum and her army of Racing Drones have reappeared to take back the Wheel of Power and are accessing the Racing Realms. The Racing Realms have tracks that are dominated by specific elements that make for severe driving conditions (such as the Fog Realm for driving in, well, fog conditions). Those who conquer a Realm gains an Accelecharger which allows a car to drive with no complications in the conditions of the associated realm. With the help of Dr. Tezla, the racers enter the realms to obtain the Accelechargers before Gelorum's Drones do. However, the racers find themselves vexed by the sudden emergence of a mysterious fourth group dubbed the Silencerz, whose enigmatic motives are masked behind private communications and incredible technology. With a new potential enemy lurking in the shadows, the situation grows more complicated as the drivers attempt to find what lies at the end of the Accelerons' creations.

The movies stand as follows:

A much more detailed synopsis of all four movies that originally was part of this page's description can be found on the Recap page.

For the most part, it was Merchandise-Driven, just like its predecessor, Hot Wheels: Highway 35 World Race. The competent storyline and very vehicle in the toyline being tailor-made to fit in with the story suggests it was also made for the art, much like ReBoot. Because Mattel paid to make these movies, it was impossible to be Screwed by the Network, as they would just take their business elsewhere—but the company that did the CGI animation was another story.

All four movies were released to shelves over the course of 2005, but for unknown reasons, the series was Left Hanging at the end of the fourth film. This was due to a switch at Mattel's internal staff that lead to the new executives cancelling the shows planned Second Season.

Unfortunately, a large period of time has muddled the presence of AcceleRacers, as it is never seen beyond the internet these days. However, when a film hits the YouTube community, it gains notable viewership. Until the cliffhanger is resolved (Which is very unlikely given the films' age), this series floats in limbo. More recently, Vert Wheeler's character reappeared as the lead character in Hot Wheels: Battle Force 5, but that series has no connection to World Race and AcceleRacers and is part of a Spiritual Successor production in a separate continuity.