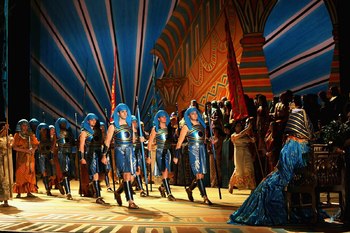 It's not always this literal.
"If you cannot sing Siegfried you can at least carry a spear."
— Thomas Pynchon, Gravity's Rainbow note Of course, this means one of the mooks in the choir from Götterdämmerung. Not Wotan, who also carries a spear, but is the protagonist of two of the four operas of the cycle.
Advertisement:

A character who walks into a scene, says a few lines at most, and departs. Essentially, an extra with a line. But hey, it's a part. You have to start somewhere, and they wouldn't give away a part this small unless it served some purpose in the story, however small... right?

Plus it's usually enough to get you a card in one of the actors' guilds.

A Bit Character or Flat Character are next step up. Compare with the Almost Dead Guy, who walks into a scene, delivers a message, and dies horribly.

The term comes from Greek theater, specifically tragedy: While the plot of a given play focused on members of important nobility, the theater still needed actors to fill the role of their military entourage - you know, the kind of soldiers whose only job on the stage is to stand at attention and give a salute whenever a noble walks by them. It has also become the standard term for an operatic supernumerary, one of several silent extras (of either sex) who may carry anything from a flagon to a kidnap victim. See here.

A Herald is usually more dramatic and foreshadows The Call.

Compare The Cameo and Pursued Protagonist. Not to be confused with the native assistant of the Great White Hunter, or with The Lancer, or with literal wielders of spears. Can sometimes result in a One-Scene Wonder. Or a Red Shirt. For just a generally dull character, see The Generic Guy (or Girl). If an already established character plays this role at some point, see Mandatory Line.