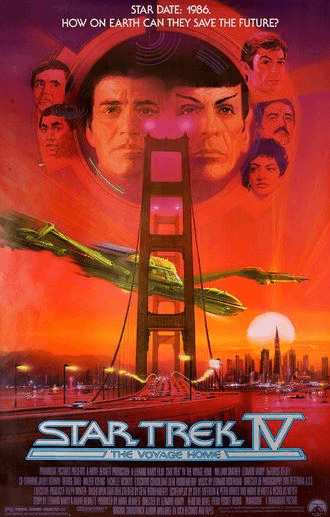 Stardate:1986. How on Earth can they save the future?
Gillian Taylor: Don't tell me — you're from outer space.
James T. Kirk: No, I'm from Iowa. I only work in outer space.
Advertisement:

Star Trek IV: The Voyage Home is the fourth movie in the Star Trek film series, released in 1986. It is directed by Leonard Nimoy, with the screenplay by Steve Meerson, Peter Krikes, Nicholas Meyer and Harve Bennett and the story by Bennett and Nimoy.

This is The One With… The Whales. And the nuclear "wessels".

Kirk is prepared to face the consequences of his actions in the previous movie, but a powerful alien probe is making its way to Earth (yes, another one), wreaking havoc with the environment and shutting down anything with power. Deducing that the probe is searching for humpback whales, which are extinct in the twenty-third century, Kirk and crew use a Klingon Bird-Of-Prey they stole in the last film to Time Travel to San Francisco in The '80s, where they hope to retrieve some and save Earth. Hilarity Ensues. Instead of the traditional Space Opera, this movie is an outright comedy. It even lacks a villain, outside of the whale probe and a whaler boat. Star Trek IV also concludes a loose trilogy arc that began with Star Trek II: The Wrath of Khan.

The wild success of this movie (it was the most financially successful Trek film until the 2009 reboot) proved to Paramount that Star Trek could survive as an expanded franchise. Not only did it greenlight another film, but it gave Gene Roddenberry the opportunity to create a brand new TV series, Star Trek: The Next Generation, and kickstarted 18 straight years of Star Trek productions.

The Voyage Home provides examples of:

Whaling is not logical

Gillian wants us to know about the plight of the whales

Whaling is not logical

Gillian wants us to know about the plight of the whales