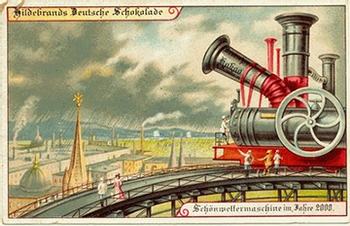 Today's Forecast: Partly Cloudy with a chance of DOOM!
"Bow before COBRA and my WEATHER DOMINATOR! Or I'll crank the humidity so high no ass-crack will ever be dry again! An eternity of swamp ass!"
— Cobra Commander, as interpreted by Robot Chicken
Advertisement:

A machine that seems to be able to control elements in the atmosphere to create or disperse clouds, incude said clouds to rain or generate lightning, or even cause full-fledged hurricanes, sometimes with such destructiveness that it doubles as a Doomsday Device in its own right; sometimes, the device may somehow be able to cause phenomena that have no relation to weather at all, because TV writers seem to not bother to differentiate meteorological natural disasters from non-meteorological ones. The device is more often than not never used for any practical application or to make money directly, which messes with the Willing Suspension of Disbelief. All in all, the whole idea of controlling such a nebulous concept as "weather" is... just odd. It hasn't stopped people from trying though.

Often the cause of Weather Dissonance. If the machine is destroyed, naturally everything will go back to the "default" weather setting of that area regardless of whatever new elements were introduced into the atmosphere to produce these new weather patterns. Expect a villain, if they get their hands on one of these, to hold the world to ransom by threatening to create a Natural Disaster Cascade or just plain use it to commit weather-terrorism on large cities anyway.

Also see Snow Means Cold and Weather of War. See Weather Manipulation for the superpower version and Earthquake Machine for when you'd rather wreak havoc on land than in the atmosphere. Compare Artificial Outdoors Display for when even the weather itself isn't real.

open/close all folders
Anime and Manga
Asian Animation
Advertisement:
Blogs
Comic Books
Fan Works
Films — Animated
Films — Live-Action
Jokes
''If your area is experiencing an extended drought, just build yourselves a race track and invite NASCAR to town."
This is in reference to the relatively high number of rainouts that NASCAR has had over the decades compared to other open-air sports sanctioning bodies such as MLB and the NFL. In the UK and the Commonwealth, similar jokes are made regarding Cricket matches being really powerful rain dances.
Literature
Live Action TV
Radio
Tabletop Games
Video Games
Web Animation
Webcomics
Web Original
Western Animation
Real Life