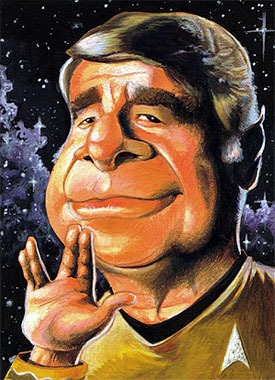 The strength of a civilization is not measured by its ability to fight wars, but rather by its ability to prevent them.
"During his speech he said something like, 'One day we'll be able to go out, get any movie we want, put it in our television and watch it at will.' I remember thinking, 'My God, how does he know these things?'"
— Raphael Sbarge
Advertisement:

Eugene Wesley "Gene" Roddenberry (August 19, 1921 - October 24, 1991), aka "The Great Bird of the Galaxy", was a USAAF bomber pilot, ex-cop, freelance scriptwriter, and creator of possibly the single most influential franchise in the history of television, Star Trek.

Roddenberry had intended to be a commercial pilot after WWII and even spent some time as a co-pilot with Pan-Am until 1947, when a fire on the Eclipse resulted in the Clipper crashing in the Syrian desert, killing fourteen people; Roddenberry, the only surviving crew member, aided in the rescue of the 19 survivors before retiring from his job the following year. Upon discovering television, Roddenberry correctly intuited that the new medium would be in need of writers. Already a published author of stories and poetry, he decided to change careers and enter into television writing.

At a friend's suggestion he joined the Los Angeles Police Department to gather experience and perspectives of which he could make use. At the same time, Dragnet creator Jack Webb was instituting a policy of buying stories from LAPD officers to be turned into scripts. Roddenberry began writing his fellow officers' accounts into more polished treatments in exchange for half the money paid to the officer. While his treatments weren't written in screenplay form, Roddenberry learned a lot about the process. By the time he left the LAPD he had successfully sold scripts to many of the dramatic shows of the period, including Mr. District Attorney (to which he made his first script sale, in 1953), Gruen Guild Playhouse, Jane Wyman Presents The Fireside Theatre, The Kaiser Aluminum Hour, The Naked City and Chevron Hall of Stars (where he sold his first science fiction script, in 1956).

He later became a regular writer for both West Point and Have Gun – Will Travel, winning a Writers' Guild Award for an episode he penned for the latter show. note  While he regularly claimed he had been the show's head writer, it didn't actually have one - as one of its producers (and a friend of Roddenberry's) Don Ingalls stated, "If anyone was the head writer, it was the story editor." While continuing to write freelance for other shows, Roddenberry moved into production, creating and producing the Marine Corps series The Lieutenant. And after The Lieutenant came the creation that would carry him for most of the rest of his life: Star Trek.

Between the end of the original Star Trek and the first of the Star Trek movies, Roddenberry produced a number of films and television pilots, including the 1971 theatrical release Pretty Maids All in a Row, Genesis II (1973) and The Questor Tapes (1974).

After 1979 and Star Trek: The Motion Picture, virtually all of Roddenberry's creative energies were applied to Star Trek. Between all the movies, TV series, and video games, he held a wide variety of posts, but until his death in 1991 he was still the final creative authority for the Trek universe, and known to fans as "The Great Bird of the Galaxy". During this time, presumably, he also developed the concepts that would later reach television audiences as Earth: Final Conflict (in 1997) and Andromeda (in 2000). These were shepherded into existence by his by-then-widow, Majel Barrett, who was also deeply influential in Star Trek and contributed to every incarnation of the franchise until Star Trek: Discovery.

Gene was a well-respected man, but not always well-liked. In many ways, his life and career reflects that of his British counterpart, Terry Nation — except with even more stories of outlandish and self-destructive behavior. He tomcatted around Paramount Studios; he screwed writers and composers out of their royalties; most importantly, Gene was stubbornly convinced that he always knew what was best for Star Trek — which, after all, he had created — and had a tendency toward the autocratic when it came to his staff. This uncompromising attitude led to tremendous flareups between him and Paramount, which clinched his removal from the Producer's chair after The Motion Picture. While he still held creative freedom over Star Trek: The Next Generation, Gene's recreational drug cocktails did his brain no good, and his health was in serious decline; by the end of the first season he had managed to alienate almost all long-time creative partners, including famed original series writers D.C. Fontana and David Gerrold (one ex-colleague told Harlan Ellison the reason Roddenberry was cremated was so nobody could piss on his grave). In general, though, outside of his professional issues, many regarded him as a friendly Gentle Giant of a man (excluding his skirt chasing of course). After his bitter divorce with his wife (due to him constantly cheating on her without her knowledge or consent), his attitude toward women soured considerably and he became harder to work with. He also apparently had a higher opinion of himself as The Casanova than women did. Many suspect that the harrowing account told by Grace Lee Whitney (who played Yeoman Rand) of being trapped in a room with an anonymous man she only ever named "The Executive" who became violently angry when she rejected his advances and forced her to strip, dance, and perform sexually, was about Rodenberry himself.

Industry Positions:
Member of the Writers Guild Executive Council
Governor of the Academy of Television Arts and Sciences
Honors:
Doctor of Humane Letters from Emerson College in Boston, Mass.
Doctor of Literature from Union College in Los Angeles
Doctor of Science from Clarkson College in Potsdam, New York
(All honorary degrees)

First writer/producer to receive a star on the Hollywood Walk of Fame.