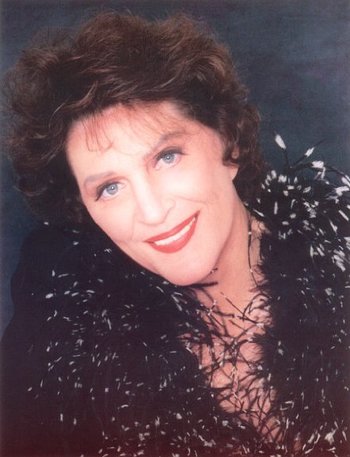 Majel Barrett (February 23, 1932 — December 18, 2008), also credited as Majel Barrett-Roddenberry, was an American model turned screen and voice actress. She was married to Star Trek creator Gene Roddenberry, and had been the only person involved in every Star Trek production from the unaired Star Trek: The Original Series pilot "The Cage" to the reboot Star Trek (2009). For that, she got dubbed "The First Lady of Star Trek'' by fans.

In "The Cage", she played the female first officer known only as "Number One". But one complaint executives had was that they didn't think audiences could accept a female first officer. The fact that she was also romantically involved with Roddenberry made the executives more hostile towards her, as they saw a relatively unknown actress getting a leading role in a show produced by her boyfriend as glaring case of Nepotism. So in the next pilot "Where No Man Has Gone Before", costar Leonard Nimoy's character, Spock, became the first officer and Barrett was recast as Nurse Christine Chapel. In addition to playing Chapel, Barrett provided the voice of the USS Enterprise's computer and other Starfleet computers, as she would throughout the franchise.

On Star Trek: The Next Generation, Barrett had the recurring role of Counselor Troi's overbearing mother Lwaxana Troi, the Betazoid ambassador to the Federation. In the 1990s, Barrett made a goodwill gesture to one of the Star Trek franchise's most successful competitors, Babylon 5 and made an appearance as a Centauri seer in a pivotal episode.

In December 2008, Majel Barrett passed away only a week after completing voicework for Star Trek (2009). The film is dedicated to both herself and Gene.

In 2016, her son Rod Roddenberry tweeted

that her voice recordings could possibly be used on the upcoming new series Star Trek: Discovery. In fact, before her death she recorded an entire phonetic database so she could continue voicing the series' computer. However, in the end her role as the voice of the Federation computer was given to a new actress. She also initially voiced the Federation ship's computer in Star Trek Online, but due to her death was replaced by Lani Minella.