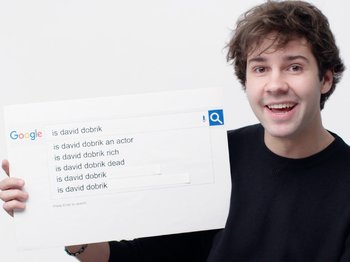 Born July 23 1996, David Julian Dobrik is a Slovak YouTube personality. Before becoming a famous YouTuber, he found early success on the video sharing platform Vine. Dobrik is known for being the leader of the popular YouTube ensemble The Vlog Squad, which features prominently in his vlogs and comprises rotating selections of his friend group. As of September 2020, Dobrik's vlog channel had accumulated 18 million subscribers and 7.7 billion views. The channel was the fifth-most viewed creator channel on YouTube in 2019, with 2.4 billion views that year. In 2017 Dobrik won Breakout Creator at the Streamy Awards. In March 2020, He was named "Gen Z's Jimmy Fallon" by The Wall Street Journal.

He is known for being the leader of the Vlog Squad, which was described by The Verge as Friends, but for vloggers. Some of the people in the vlogs were Josh Peck and Jason Nash who he would later start a podcast with.

He was born in Kosice, Slovakia, but currently resides in Vernon Hills, Illinois. A tennis prodigy as a youth, he eventually moved to Los Angeles to pursue his media career. He used to date Liza Koshy but now dates Lorraine Nash. Yes, that Nash. However later it was revealed that he legally married her as a comedic bit for one of his videos and divorced her a month later. He also has 3 siblings (Ester, Sarah and Toby).

Tropes that apply to David Dobrik.